Cherish the fibre in your diet 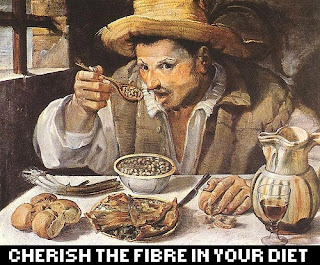 Dietary fibre is generally defined as plant material, mainly derived from plant cell wall that resists the action of digestive enzymes in the gut. They are present in whole cereals, pulses, legumes, vegetables, and fruits. Dietary fibres are commonly classified by its water soluble property into insoluble and soluble fibre.

Diets rich in fibre and complex carbohydrates slow the absorption of carbohydrates there by decreasing the rapid increase of sugar after a meal. They also obviate the need for insulin or oral hypo glycemic drugs.

Consumption of fibre rich foods increases the growth of the friendly bacteria while decreasing the growth of harmful Ecoli, clostridia, and bacteroids. Carcinogens are also excreted trapped between the fibre cells.

Consuming a diet rich in fibre increases the satiety value, thereby giving a feeling of fullness and preclude from eating a heavy meal. Thus the average consumption of dietary fibre should be at least 25 – 40 g per day per person as suggested by American Dietetic association.